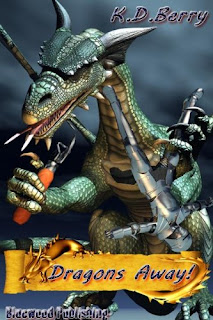 Dragons Away!
by K.D. Berry

It seemed like such a good idea at the time ... a wager with the devious, dangerous and probably quite deranged King Davkosh of the Southern Realms. Half the kingdom staked in a race between mystery contenders. Ten leagues, point to point as the –er– crow flies. hDrewdop the Illusionist is quick to point out the flaws in this plan and is tasked with a secret spy mission - to find out just what kind of invincible champion Davkosh has training at home.Travelling in magical disguise causes unforeseen complications for Drewdop, while his half-ogre bodyguard, in the guise of a beautiful woman, certainly turns a few heads.But Drewdop soon discovers that the great race is the least of their worries. Davkosh's glamorous, fiery and ruthless queen, Gunora, is massing an army ready for attack whatever the outcome.Meanwhile, deep in the dark forest, one of Davkosh's elite royal messengers is facing his own perilous destiny - how to become the world's first and only surviving dragon rider...

This is the second book I have read by K.D. Berry and it was just as good this time around. Both books take place in the same "world" but can be read as stand alones, but your going to end up wanting to read both of them anyway. I would suggest to read this one before you picked up Growing Disenchantments just because some of the same characters show up in both books.

I really liked all the characters and felt like I got to know them really well and was rooting for the good guys and scowling at the bad ones. I liked the added element of the dragon, you really don't find many books with dragons in them and  I like reading about something that isn't seem very often. Thinking about it there is pretty much a little bit of every classic fantasy species in here, and it all worked really well.

This book is defiantly a rib tickler. So many crazy things happen that your pretty much reading with either a little bit of a shocked look or chucking a little to yourself. Its hard to explain the feel of this book, its like watching a Monty Python movie. . .everything is just a little bit silly all the time or you can't believe that that just happened.

I think what really made me like this book though is how lighthearted it is, though there is some troubling things going on you never really get the feeling that anyone is down. . .well except for Depressed. If things start getting a little tough something happens to lighten the mood up. I'm pretty sure I had a smile on my face the entire read, and I'm sure I looked pretty crazy as well especially when I would laugh out loud.

Would I recommend this book? Yes, I had a lot of fun reading it. . . .and I love when I have fun reading.
Posted by Unknown at 7:58 PM 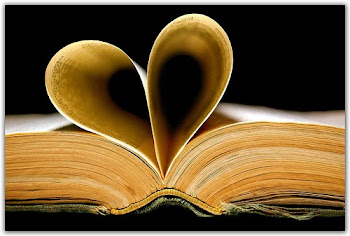 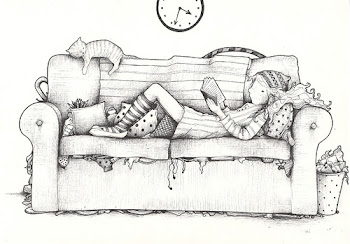